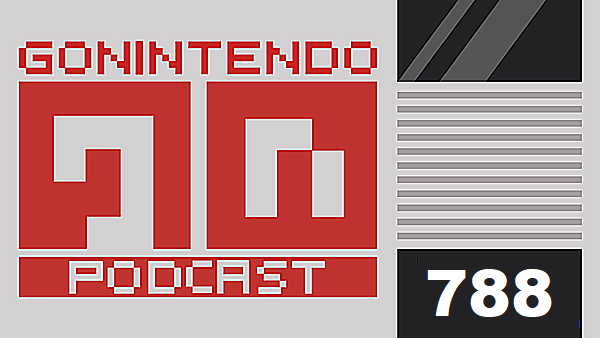 It was a super busy week in the world of Nintendo, so we'll have plenty to cover in this week's podcast. We sure hope you can join us for the live show! It's always more fun when you guys are around.

Don't forget to join us in the Discord to chat live with other viewers/listeners, as well as us during the show! If you haven't joined up yet, you can do so right here. 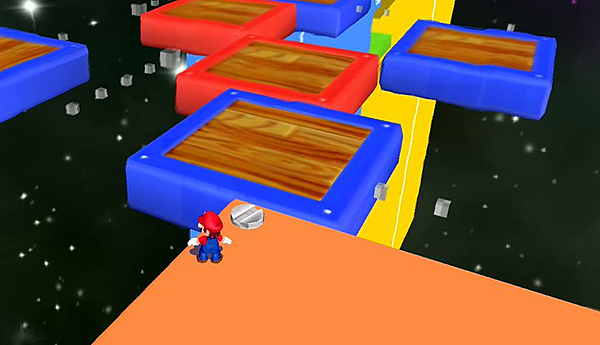 As you might have heard, Super Mario 3D All-Stars packs in 3 classic Mario adventures that you can play on your Switch. These titles have been brought over through emulation, and it seems that Super Mario Sunshine shows off one of the side effects of that emulation.

If you take on the "Secret of the Dirty Lake" challenge in Super Mario Sunshine, you'll eventually come to the area you see in the screen above. You might notice tiny grey cubes floating between the red and blue platforms. Those are 'debug cubes' show the path that the platforms will move on. This is actually an error introduced through a bug in the emulation. Those blocks shouldn't be visible.

Nintendo will most likely update the game to remove this error, but I'm guessing most people don't consider it a big deal to begin with.

Thanks to Dondom95 for the heads up!
Submitted by: dondom95
Source: Link
Rating: 2 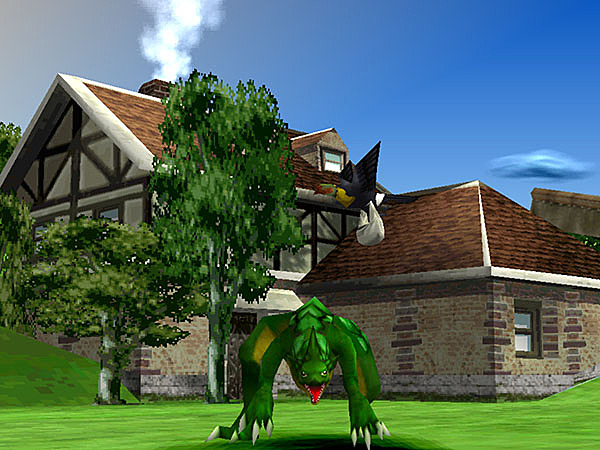 Monster Rancher 2 is available on the Switch in Japan, and Koei Tecmo actually went in a did a lot of work to spruce up this re-release. Check out a rundown of 50 changes from the original version below.

The Swim training is supposed to give a major raise on Defense and a minor raise on Life. However, there was an infamous bug that reversed the stat affinity check between the two stats. As a result, monsters with high Life base stat like Plant could benefit from easy Defense raise, while monsters that are supposedly Defense-oriented like Monol suffered from this bug.

Reduced lifespan reduction for doing Errantries, making it more enticing to have a monster learn new techniques without worrying too much about its lifespan.

Wracky used to be known as Chucky in the original Japanese PS1 release, but the new Japanese port changes its name to Wracky as well.

A glitch in the original release caused the errantry boss King Ape to have a limited timeframe to encounter.

A Henger X Gali breed that was available in Monster Rancher 1; known in the English release as Proto. Although it was also slated to appear in MR2, its data was not actually included so it couldn't be produced in the original release.

If all 3 Hall of Fame slots were already filled, trying to get a new monster into the list would freeze the game.

An event check glitch caused playing from the 30,001st week (2nd week of April 1625) to be very problematic. The worst case from this bug was reducing a monster's lifespan by a week whenever one loads a save data made in the Ranch.

The original release had a bug that prevented you from obtaining Mysterious Seeds if you proceeded so late that all items were already lined up at the shop.

A monster may occasionally have a desire which, if rejected or unfulfilled, will result in its stress going up. There was an infamous bug in the original Japanese release where a monster occasionally gain stress on its own due to the desire event kicking in but automatically ended with a refusal without any dialogues.

In the original release, Colt would only inform you of the first monster's peak period or end of lifespan. With this port, she will continue to offer the same advice on all subsequent monsters.

Eating a Jelly item will now actually change the monster's nature as well.

Although the item description hinted at relieving stress, it didn't have any stress-reduction effects applied in the original version. With this fix, having the item(s) in the inventory will now properly reduce stress.

Strong Glue will become purchasable in the Shop

In the original release, the Magic Banana used to have lifespan addition as one of its possible effects. This is getting replaced with reduction of fatigue or stress.

Your monster will now fight more proactively even when you opt to not control it in battles.

Opponent monsters used to be unable to activate status like Power and Anger; they will be able to do so now.

This status has a drawback of doubling damage taken, which wasn't properly implemented in the original release.

Color Pandora breeds will recover Guts faster when this status is activated.

Enables purchases of multiple items at once

Becomes able to raise Boss Monsters fought at Errantries, such as the Blue Phoenix

Becomes able to raise White Suezo and White Mocchi, which used to only appear as opponents in the Legend Cup.

Alters statistics not visible to the player, such as the monster's full lifespan.

Parameter fix for FIMBA monsters appearing at the IMa-FIMBA Meet

The Elder's Cup, which is available on the 2nd week of June for monsters that are at least 6y & 3m old, had a monster named Lucky that had unusual stats; it has now been implemented as its official stats.

Improved quality for message fonts and images including tournament logos

Stat values are now subdivided when calculating damage, so even a small gap in stats will mean a lot in battles now.

BGMs and sound effects are re-recorded, and the menu will also actually have a title BGM

You can now go back directly to title screen through the Menu button.

You can download a friend's monster data for your own monster to fight against.

Monsters you've uploaded can be matched against other breeders' monsters with roughly the same strength levels.

If you're getting a new mobile phone, this feature will be essential for you to not lose the game's save data.

You can take a screenshot from the game and share it right away on the social media of your choice.

The mini-game used to be accessible in the Japanese PS1 release by using the PocketStation.

This is the alternative used to generate monsters from CDs, as neither the Switch or mobile phones have disc drives.

The My Page webpage is available to check the latest news about the game, as well as results of random battles and tournaments.

Players can enter their frozen monsters to be placed on online tournament brackets.

Detective Case and Clown Bot in: Murder in The Hotel Lisbon heads to Switch on Sept. 30th, 2020

A point and click graphic adventure game. Play as Detective Case and Clown Bot. Search for clues and interview witnesses.

A strange murder has occurred in the Hotel Lisbon. A man committed suicide with 14 stabs to the back, while at the same time peacefully drinking his coffee. This case, with contradictory facts, could only be solved by the amazing Detective Case and his sidekick Clown Bot.

Detective Case and Clown Bot in: Murder in The Hotel Lisbon is coming to Switch on Sept. 30th, 2020. The game is up for pre-order now, and is priced at $10. You'll need just 80 mb of space to grab this one. 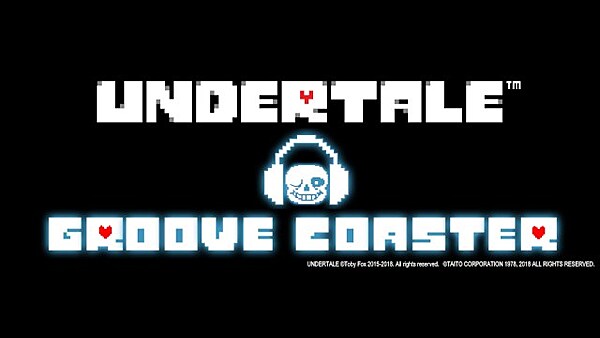 Back at the start of the week, a special 'Undertale Pack Bargain Set' was made available for Groove Coaster: Wai Wai Party!!!! in Japan. That same pack has now see release around the rest of the world.

The Undertale DLC pack includes 10x UNDERTALE songs, 2x navigators (Papyrus and Sans), and 6x avatars (Human, Flowey, Soul, Napsta Blook, Temmie, and Annoying Dog). You can get the pack itself for $14.99, or you can buy Groove Coaster: Wai Wai Party!!!! and the Undertale DLC pack in a $59.99 bundle. This deal will be offered until Oct. 4th, 2020.

IGN Video - 6 Reasons Zelda: Breath of the Wild is Still Riveting in 2020

The Legend of Zelda: Breath of the Wild is the gift that keeps on giving. We cover some of the most fun you can have in the game in 2020, including the Bomb Impact Launch, Bullet-Time Bounce, Cryonis launches, retaining elemental power on weapons, Moon Jumping, wall clipping, whistle sprinting, durability transfers, weapon duping, the hidden XP system and what the Shield Guard stat means.

Trying to survive a Royal Rumble in WWE 2K Battlegrounds

I'm a huge WWE fan, so of course I've been dying to go hands-on with WWE 2K Battlegrounds. I did at tiny bit of training, and then decided to jump headfirst into a Royal Rumble. Do I have what it takes to be the last man standing?! 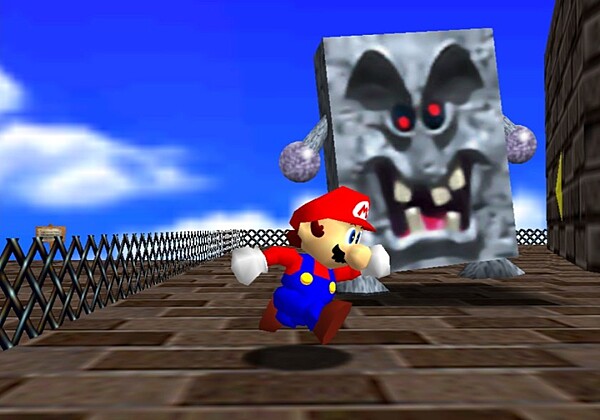 Super Mario 3D All-Stars leads the way this week overall, but the surprise-launch of Hades is right behind it! Check out the charts for Sept. 19th, 2020 below. 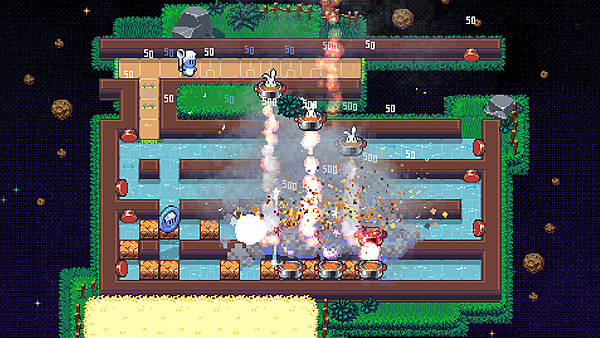 Radical Rabbit Stew has been updated to Version 1.1 on Switch. Check out the patch notes below.

Check out a new trailer for Star Renegades

Star Renegades is out now on PC, which means the bulk of the focus has most likely shifted to the Switch version. Last we heard, Star Renegades will be hitting Switch this year as well.